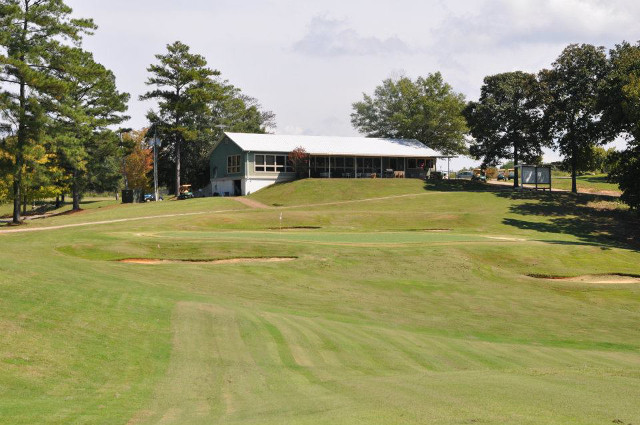 Last August, Tony Parton and his wife decided to pay a visit to one of Tony’s favorite places – Alpine Bay Golf Club. Parton had been a member of the course for over a decade, until it closed in December of 2014.

Parton and his wife walked along the course and when they got to a green, were shocked at the condition of the course. The green was overgrown, with weeds and plant growing high and the original grass not growing at all but dead.

While Parton and his wife were at the green, they began to pull up the worst of the weeds, working to uncover what was left of the golf course they both loved. Mark Calhoun, a previous member of Alpine Bay Golf Club and a friend of Parton’s called him while he was out at the course.

“He ask where I was, and I sad ‘you’ll never believe ne, but I’m at Alpine,” Parton said. “He met me out there and we were at the green and trying to figure out what we could do about it.”

The next day, Parton returned to the course, and brought his mower along. He spent the day clearing off the green he and his wife has started on the day before.

“That next day – that’s when I realized there was hope for this course,” Parton said.

Parton immediately called the realtor that was representing the course and made an offer. The process took a while and it wasn’t until January that he had officially purchased the golf course.

The next step in the process was to get more people on board. Parton and Calhoun established Alpine Group LLC shortly after the purchase.

The group grew in size as more investors joined the effort and after five months of restoration, the course was officially opened to the public on August 2. Parton said no words could describe the feeling of watching golfers tee off at the course for the first time.

Since its reopening, Alpine Bay Golf Club has a;ready acquired 60 members. Alpine Group LLC is ptimistic about that number and eager to watch it grow.

“Having such a great course is really a great thing for the St. Clair and Talladega communities,” Pell City Chamber of Commerce Executive Director Lisa Gaither said. “There are a lot of residents in this area who will not have a course close by to play at.”

Gaither was on hand at the club’s ribbon cutting ceremony in a joint effort with the Greater Talladega/Lincoln Chamber of Commerce. The organization’s came together in support of Alpine Group LLC’s efforts to get the golf course open to the public again.

The golf course was originally opened in 1972, and was an original design by Robert Trent Jones, Sr. The 144-acre property has an 18-hole golf course, practice hole, driving range and clubhouse.