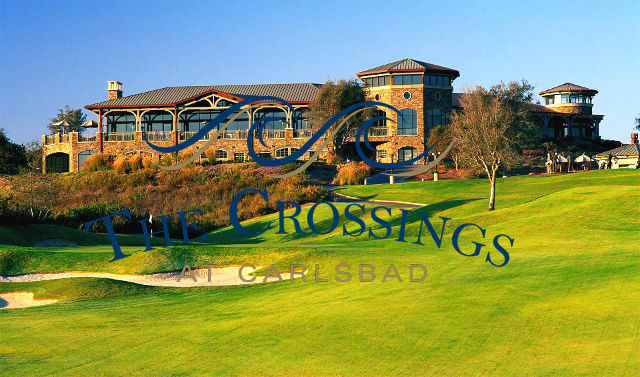 The city of Carlsbad will spend $14.8 million this year to pay off construction bonds for its nearly $70 million The Crossings golf course, which when it opened in 2007 was one of the most expensive municipal courses in the United States.

Paying off the bonds will save the city about $8.4 million in future interest charges and help to make the course self-sufficient, Administrative Services Director Chuck McBride said on Thursday. The city has been making annual payments on the construction bonds, most recently $1.1 million in principal and interest.

“The course is now breaking even,” McBride said.

The original 30-year construction bonds were issued for $18,540,000 in September 2006 with a provision that they could not be paid off for the first 10 years, McBride said.

Over the years, Carlsbad has been roundly criticized over The Crossings, specifically its construction costs, ongoing expenses and what players described as the difficulty of the 18-hole course.

The challenging links cover 400 rolling acres that straddle College Boulevard on the north side of Palomar Airport Road, within two miles of the Pacific Ocean.

The city began acquiring land in the 1990s and rejected the first round of construction bids in 2001 after the California Coastal Commission challenged the plan. It was four years before the project went out to bid again.

Early estimates placed land and construction costs at $55 million, which ballooned as expenses mounted. The course realigned multiple times because of environmental challenges. The site includes five bridges across roads and natural canyons.

Carlsbad continued to pour money into the course, spending $80,000 in 2011 to straighten out the 18th hole and flatten the green. Plans also have been discussed for improving the 10th and 15th holes.

Most of the money to build the golf course cane from the city’s general fund, the account that pats day-to-day expenses such as police, fire, administrative service.

The City Council approved the bond payment June 28 as part of its operating and capital improvement budgets for the fiscal year that began July 1. The operating budget, which includes the general fund, totals $250 million, and the capital budget, which contains things such as new vehicles and a fire station, was $64.4 million.

Large swaths of land in and around the course have been left as public trails and natural habital. The city has paid as much as $300,000 annually to maintain that property, McBride said. That land is now considered mature and self-sustaining, no longer requiring maintenance.

The golf course has been run since it opened by KemperSports Management. The company’s current five-year contract expires in 2017.

KemperSports’ agreement includes a fixed portion and a percentage of revenue, McBride said. The fixed portion, which increases based on the consumer price index, was $125,000 the first year and will be about $130,000 this calendar year. The revenue percentage is on a graduated scale and is capped at $125,000. The most recent payment was $89,000.