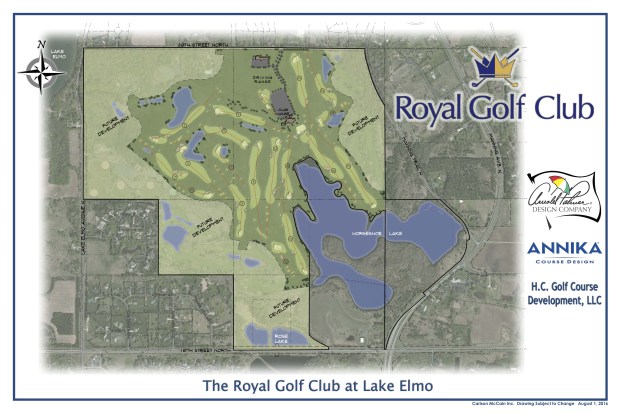 Driveable par 4’s, wide fairways, a nighttime par-3 course, and water hazards that can be avoided if you hate getting wet – those are mong the features designers say will make the Royal Golf Club accessible to the average hack, while still being capable of hosting a PGA Tour-level event. The new course could be open as soon as June 2017.

Royal Golf Club will remain best known as the former Tartan Park Golf Course, the longtime resort for 3M employees, their families and clients. Amid flagging participation, even after 3M Co. opened the course to the public in 2014, the Maplewood-based company closed the facility last year.

Earlier this year, it sold the site for $5 million to Hollis Cavner, a coordinator of PGA Tour events. Locally, Cavner is best known for running the 3M championship that took place last weekend at TPC Twin Cities in Blain, a course that Cavner teamed up with Palmer to develop.

Hundreds of 3M employees know Tartan for its 27 holes, as well as tennis courts, lawn bowling, archery range and a clubhouse, that stretched across 477 acres of rolling landscape overlooking Horseshoe Lake. Out of that, Arnold Palmer Design Co. and Anikka Course Design have carved out an 18-hole track, driving range, practice area and 9-hole par-3 course, all surrounded by 310 new homes.

Will it be the best metro course?

No stranger to showmanship, Cavner in March proclaimed that Royal “will be the best golf course in the metro area.” With the likes of TPC and Hazeltine National Golf Club in Chaska, among others, that’s a bold statement.

On Thursday, as Palmer an Sorenstam toured the course, essentially signing off on the final designs before fairway grasses are planted, Cavner said that he believes Royal will be a strong enough course to challenge the best in the world. “We can host anything,” he said.

Yet – unlike modern championship courses that feature huge distances – Royal Golf Club will be capable of playing for any skill, designers say.

For example, from Tartan’s three 9-hole courses, a round of 18 could be played as short as 5,475 yards, or as long as 6,847 yards. Royal’s 18 holes can play a massive 7,167 yards from the back these, or shorter than 4,000 yards from the front tees, said Thad Layton, a senior course architect with Palmer’s firm and the lead designer at Royal.

“We want it to never play the same way twice,” said Layton. “By changing the hole location and changing the tee locations, we can create vastly different golf holes.”

Layton’s charge was not to erase Tartan, but rather to work with the existing landscape, and even the general confines of two previous 9-hole links, and reinvent the golf experience to make it accessible for all, he said.

“We didn’t set out to create a major championship course,” he said Thursday. “Our philosophy was to keep the natural beauty we already gad here. And for the course, first, to make it fun.”

“It’s no fun to lose golf balls,” Layton said. So fairways are often 50 yards wide and common configurations will not force golfers to carry shots over water – “although there might be a reward if they do.” But hazard avoidance won’t simply offer detours for high handicappers, Layton said. “We design the greens to be more receptive to those approaches.”

In addition, Layton said the course features two short par-4 holes with driveable greens. The third hole is uphill, but a mere 300 yards, reachable for big hitters who aim to cut a late dog leg. However, from that angle, the ball must carry a sand trap and stay put on a relatively small green made shallower by the angle of approach. On the other hand, the restrained player can avoid the trouble by playing safely into the fairway, which offers up an approach to the green’s receptive side.

“It equalizes two very different levels of players,” he said.

The stretch of holes follows the landscape and direction of play as one of Tartan’s nines, and the topography likely will be recognizable to hose familiar with Tartan. However, the short par-4 third, for example, and the forth, were drawn for what had been a long, uphill par 5 with a blind second shot. Layton said it was Sorenstam herself who objected to that hole as an arduous slog for golfers of average skill, and with input that stretch of the course has been re-invented.

On the other hand, Royal’s back nine, which will be located on the eastern half of the property, exhibits holes completely rebuilt on the land. “That’s really new golf,” Layton said.

Lastly on the fun scale, getting sand in your shoes and face doesn’t generally rate high, and Layton said Royal, at this points, throws a mere 30 bunkers at the golfer. To be clear, sand comes into play, Layton said, but only in key places. General waywardness is not penalized with sand traps he said.

In addition, Royal will offer a 9-hole “family par 3” course offering holes between 40 yards and 120 yards. That course will be lighted, Cavner said.

“We want people to play here when they have time,” he said.

Greens fees have not been decided.