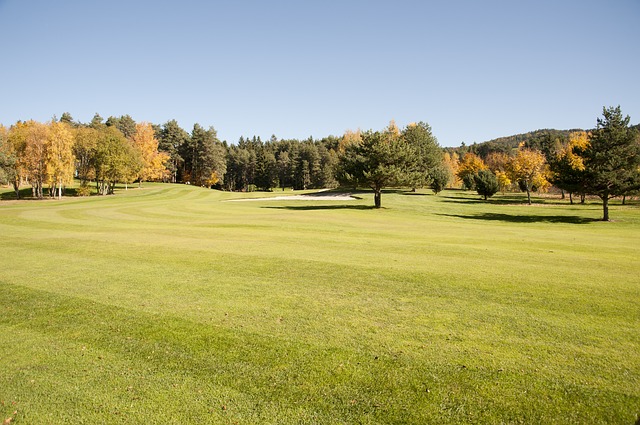 You probably visited your favorite golf course at different times each year, finding holes punched in the ground. For some, it’s very unpleasant while others play anyway,

However, golf course aeration helps to keep golf courses in good shape, even when the weather turns against the superintendents.

Aeration is designed to let golf course grass breathe and stretch out. It’s designed to control what’s known as “organic matter,” dying grass and grass parts, while loosening compacted soil and allowing water to flow better underground. By having compacted, poor-performing or dead grass parts in the soil, the healthy turf can struggle to grow and develop strong roots. Compacted soil, created from foot traffic, weather and other factors, reduces oxygen levels in the soil and can inhibit water from getting to turf roots. All of this compacting and organic matter can also make for a softer golf course because it’s unable to drain water and push new turf to the surface.

So, golf courses are aerated to provide a better golfcourse. There are a variety of methods to aerate, but the general idea is to either make punch marks in the soil with rolling spikes or using equipment to create varying size soil cores that are pulled out of the ground. These holes allow excess moisture to evaporate and better chemistry in the soil to promote healthy turf growth.

Superintendents don’t always aerate the same areas or by a fixed schedule. Sometimes they do tees, others greens and then fairways. Aeration can even be done of a combination of these areas. Approaches can be staggered, too. That is left to the superintendent, whose job it is to figure out which areas, when and how they will be aerated.

Aeration schedules and timing can vary around the country, as well as course to course, depending on the soil, traffic, cost, type of grass, weather and many more. Many golf courses will aerate two to three times in a year. However, aeration is only done when the turf is healthy and actively growing, to ensure a speedy recovery.

For grasses like bentgrass and Poa annua, core aeration is best done in the spring and fall. For heat-tolerant grasses such as bermudagrass and paspalum, core aeration is best performed in late spring and throughout the summer. However, superintendents tend to fertilize the turf before aerating, adding to an unpleasant game because the greens are often a little soggy or spongy until the tines come in to punch holes.

The aeration holes are then filled with topdressing – typically sand – and usually hit with the sand a second time after the first filling settles into the core holes. A properly done aeration would usually take a golf course about two weeks to recover.

Once the grass grows back through the aeration holes to a healthy level, the course is mowed and rolled again, with greens as good as new afterwards.

Framingham Resident to Vote on Buying Golf Course for $5.5M